“Word” in these verses comes from the Greek Logos.  Some Greek philosophers used Logos to mean actual words or a saying, others used it to mean the reasoning or rational thought that preceeds and becomes spoken word, and others took Logos a step further to represent the larger cosmic reasoning, which animated the universe to bring it together, and some felt that Logos was an actual being who served as an intermediary between the material world and God (Thanks Wiki!).

The choice of Logos in John 1 is intentional and is an extension of all of the various meanings and understandings of it; it is not limited to one meaning. Logos was the actual Word that came from God’s mouth.  Logos was generated in His mind. Logos animated the Universe, bringing God’s intent to life by the power of His creative reasoning.  Logos (Jesus Christ) served as an intermediary between God and the material world.  And He still does.

“For the Word of God is alive and active. Sharper than any double-edged sword, It penetrates even to dividing soul and spirit, joints and marrow; It judges the thoughts and attitudes of the heart. Nothing in all creation is hidden from God’s sight. Everything is uncovered and laid bare before the eyes of Him to whom we must give account” (Heb 4:12-13).  In this verse Word has the same translation, Logos.

God’s Word (Jesus) is living and active; it (He) has power.  I can easily see the relationship of Logos (the spoken Word of God the Creator) to both: to the creative being Jesus, and to the written Word of God, the scriptures.  Like Logos (the Word that proceeded from God’s mouth in John 1) all Scripture [the written word] is God-breathed and is useful for teaching, rebuking, correcting and training in righteousness, so that the servant of God may be thoroughly equipped for every good work (2 Tim 3:16-17). God’s written Word has transformative power; it is at work in us to help accomplish His plan for us.

God’s plan is different for everyone, yet in some ways it is the same for everyone too.  We are called to be in relationship with Him.  We are promised: “draw near to God, and He will draw near to you” (James 4:8).  Studying and memorizing scripture is one way we can draw near to Him, to know Him better, to keep Him first in our hearts and uppermost in our minds.  Taking the Word into us changes us, strengthens us.   “How can a young person stay on the path of purity? By living according to your word. I seek you with all my heart; do not let me stray from your commands. I have hidden your word in my heart that I might not sin against you” (Psalm 119:9-11).

Daily time in the [written] Word helps us to incorporate the living Word [Jesus] into our lives.   The Words that came from the breath of God’s mouth, the Words that inspired the scriptures; they were generated in His mind.  As Logos animated the Universe, God’s Word can animate our lives.  Jesus, Himself, quoted scripture throughout His ministry and life.  He did so because it had the power to convict sinners, to rebuke the Devil, to encourage believers.  The “scripture” Jesus quoted was what we call the Old Testament.  The Word of God is the Word of God, Old or New Testament; it has power.

“Think carefully about all of the words I have announced to you today. I want you to command your children to be careful to obey all of the words of this law.  They aren’t just useless words for you. They are your very life” (Deut 32:46-47).  There are those who disparage “the law” as obsolete, as a heavy yoke that we must shed, now that we have been given Grace through Jesus Christ.  It is not that simple.

As Paul said, “Whatever was written in earlier times was written for our instruction, so that through perseverance and the encouragement of the Scriptures we might have hope” (Romans 15:4).  The whole of God’s Word tells us about God’s desire for relationship with us, and studying it teaches us how to demonstrate our love for Him, and how to live our lives.    “Everyone then who hears these words (logos again!) of mine and does them will be like a wise man who built his house on the rock.  And the rain fell, and the floods came, and the winds blew and beat on that house, but it did not fall, because it had been founded on the rock (Matt 7:24-25).

« Called to Community…
My Journal: The Other John »

I'm a work in progress. Lately, I'm trying to learn how to plant deep roots after a lifetime of military moves. Planting seems to be slow work for me!

Life on the move. Chronic and serious illnesses. Marriage struggles. At times, it has been hard to see God's goodness. But I’ve learned that CURATING the GOOD (collecting evidence of God's goodness and putting it on display)—this is a life-giving practice. Won't you join me? Read More… 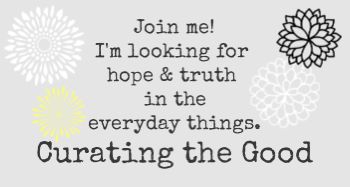 Stay up to date

Bible Verse of the Day 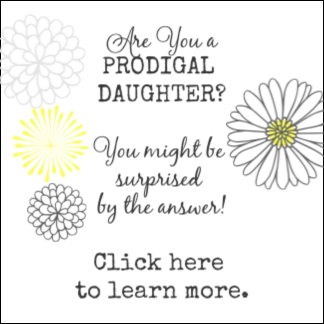 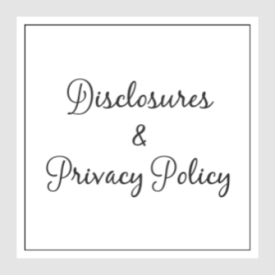 Want to come with?

@mercyhouseglobal All year I will enjoy this beaut

“Maybe we should wait till movie starts?” 😂

Scout’s all grown up! Two years old and such a c

Just chillin’ with my peeps! ❤️

We had the best time in Old Quebec City! Just two